Aphrodite's destiny is written and her fate is sealed. From the moment of her birth Aphrodite was defined as the object of desire, the icon of beauty and love. As a young girl, she played alone, testing the fates by marking and scarring herself. She tore and muddied her gowns. She cut her hair off and bit her nails until they bled but each morning she was perfect again: was dressed and dragged into the temple by her handmaidens, to take her place beside Zeus.

Aphrodite disappeared with regularity. She visited the Oracle of Delphi where she could hide from her duties and learned about the powerful potions, cures, curses and trances she could use to retaliate against the humans and lesser gods. She learned to manipulate and expand her vacuous role in a long and lonely eternity. 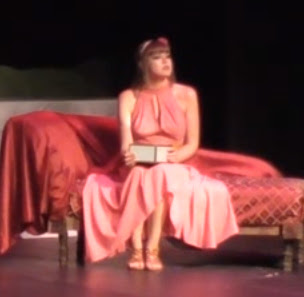 She was loved, hated, beautiful and irresistible, this daughter of Zeus. Outbursts of emotions, fueled by her desire for freedom from the demands of perfection, the attention of bad boys from Sparta and women who challenged and criticized every part of her, each strand of hair, each measurement of the classic body. For all her gifts of sensuous attraction and seductive prowess, she is unfulfilled by her roll in Olympian life. Forever doomed to be an object of man's desires, she fights for equality with Ares, in hopes of turning his head and owning his heart. She acts out with rage when she is displeased. She throws tantrums when Ares doesn't respond to her and uses her powers with magic and the sacred arts to overcome her enemies, reorder the status quo and wield her powerful revenge upon the lesser gods and humans.

ACT 2
No death do us part
Posted by Sisyphus the Musical at 12:06 PM