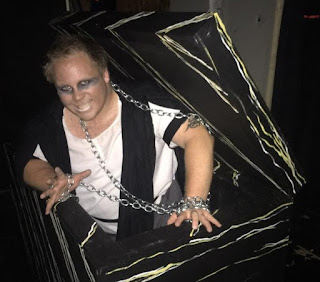 Thantos is lost. He was rejected by his mother and left to die, learning to survive by doing whatever it takes. He never experienced love and was only touched by the cold hand of his mother. Thantos becomes the loyal buddy, assassin, henchman, executioner and innocent victim of Zeus. Thantos is constantly trying to prove his loyalty to Zeus.

He is manipulated by Zeus who asks him to perform demeaning tasks for him. Eroticized by the female scent, Thantos stalks the conquests for Zeus. At times he has been allowed to watch Zeus in his sexual games with women. Thantos tries to have a secret life with a woman, but he is impotent and unable to experience love. 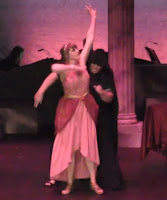 Thantos learned to use his great strength, imposing stature and commanding voice to survive captivity and starvation at the hands of war lords. He can frighten with his mere presence. He is conflicted between hurting or protecting the humans. He dreams of being an equal and having a friend, but he can't begin to put it together. He feels nothing about killing, doesn't feel physical pain but is tortured by his isolation. He falls into an endless loop of self-pity, blames the humans and can't figure out right from wrong. He has never refused Zeus anything, but one day he wants to be his own man.

ACT 2
I will make you scream
Posted by Sisyphus the Musical at 6:30 PM