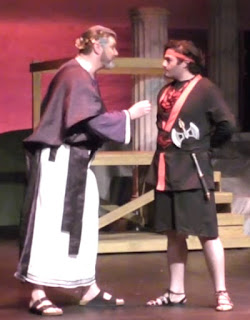 In the world of the gods, Zeus was top dog. Master of the sky, avenger of righteousness and protector of Olympus, he was an unpredictable father figure controlling everything. Carrying the burden of murdering his own father forced him to constantly look over his shoulder. He trusted no one especially the humans. In an explosive rage he sent floods to drown the humans on earth so that he could re-populate earth with mortals more grateful, loyal and subservient. He drank heavily, often babbling to his father for forgiveness and asking Gaea to release the curse of immortality.

Zeus was possessed with maintaining his power. Disguised as a human, Zeus would wonder the Corinthian fields, spying on the humans, trying to learn their deceitful plans against him. Occasionally he would steal a goat or a cask of mead from a farm. When he was caught, he was brushed off as a crazy old man who needed a hot meal, was fed and sent on his way. 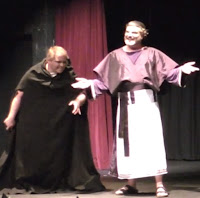 Zeus became more twisted and restless, cavorting recklessly, kidnapping nubile daughters for his pleasure and creating hostility among the lesser gods. Zeus longs for a loyal ally. Like all the gods, he is alone, friendless.

Desiring ultimate power drives Zeus mad. He finds a dark collaborator in Thantos. Together they set against the humans and their leader Sisyphus. On a dark and moonless night, he sends his loyal henchman to take Sisyphus, to hell. The people rise-up against Zeus and Olympus. Believing he is almighty and immortal, Zeus makes a fatal error in the final confrontation.

ACT 2
Quid pro quo
My clairvoyance
Confidant
I’ll never give in
Posted by Sisyphus the Musical at 7:30 AM