Without fear or remorse, Ares conquers the physical world. The social and spirit realms have long interrupted his focus on the warrior world in which he reigns supreme. The headaches started before he could ride a powerful horse or lift a sword against an enemy. He screamed for hours in a darkened room until his sister, Aphrodite came to him, comforted him, loved him with her body and her beauty. Nightmares are a constant companion and sleep is illusive.

The icon of male sexuality and prowess in battle, has played his war games since childhood, killing eagles by hand, luring playmates into traps from which he would not free them. As night approaches he seeks out a female to relieve his hardened phallus and keep sleep at bay. Only in the light of early morning can he sleep, dosed with wine and herbs. 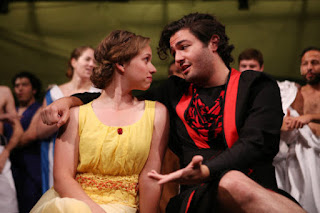 The terrible headaches feed his virulence in battle and his taste for blood grows strong. Ares secret stays hidden from everyone but Aphrodite. No one can know. His life and destiny depend on it. Sparring for the win in sport and competition keeps him focused on his role - god of war.

Using his sexual powers, he dominates and tethers women to his demands. He pleases himself first and wonders why Aphrodite is unhappy with their relationship. Love of self is the closest he can get to understanding romantic love. The knowledge that he is immortal only adds to his egotistical and arrogant behavior, covering his need to never let his guard down. This makes him unavailable for an intimate love relationship and leaves him alone. Aphrodite is his most complicated and enduring challenge. Fate has joined them forever.

ACT 2
No death do us part
Posted by Sisyphus the Musical at 2:30 PM